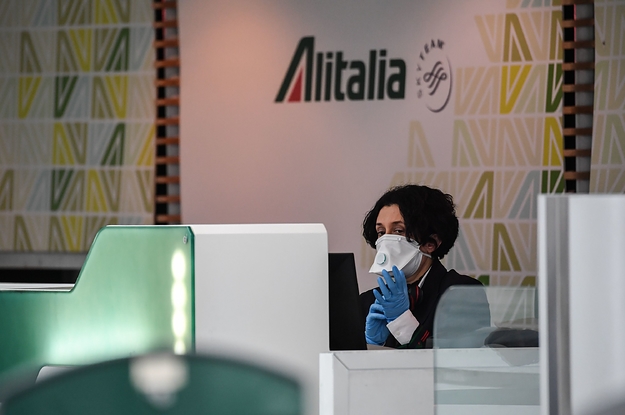 The exodus of Italians from Britain began with the tourists, who feared being stranded after their country went into coronavirus lockdown 10 days ago. Then it was the temporary workers whose jobs were wiped out by the economic shutdown caused by the outbreak and they were left with no income. Now even some Italian citizens with more stable employment are leaving the UK.

And it’s not just the Italians. Thousands of Europeans have left Britain in recent days to return to their home countries, some driven by fear of the coronavirus, according to diplomatic sources. Others are students or people who want to be close to their loved ones during a crisis that many European leaders have described as the continent’s greatest challenge since the end of the Second World War.

“It is well and truly a Dunkirk in reverse,” a senior diplomat from a major EU member state told BuzzFeed News.

As countries across Europe have gone into lockdown, borders have shut and hundreds of flights have been cancelled, European embassies in the UK have had to rapidly put in place processes to advise their citizens — and in some cases help them get back to their countries of origin.

Although most embassies do not have enough data to map out the exact number of people that have left and their reasons for doing so, diplomats from six EU member states told BuzzFeed News that some of their fellow citizens had left because frightened by the softer approach the UK was taking towards the coronavirus when compared to what they were seeing in other European countries. Others said they had been left confused by the mixed messages.

“[Their government] is telling them to come home as soon as possible. The UK is advising to not travel. What to do?,” one of the diplomats said.

Another diplomat said that many of their nationals were seeing schools back home shut down and didn’t understand Boris Johnson’s decision to keep them open here until this week.

The number of people leaving is likely to continue to rise as the hospitality sector is among the hardest hit by closures. The trade organisation which represents restaurants, pubs, and bars in Britain estimates that across the industry, between 200,000 and 250,000 jobs have already been cut and has warned that up to one million jobs could go, according to a report on the website Eater.

By April 3, Alitalia will have operated up to 64 flights since the beginning of the crisis.

It is not the only airline to organise what one diplomat described as an “evacuation.”

Polish airline LOT has been running the “LOTdoDomu” — Flight to Home — programme since Poland closed its borders to most foreigners last weekend. The airline has since flown back more than 18,000 Polish nationals on 121 flights from many countries around the world. 6,009 people have been flown from Britain to Poland this week, LOT tweeted on Saturday.

A Polish diplomat told BuzzFeed News that the airline had initially been running up to 10 flights a day from London and though these had now been reduced to “4-5” they were still all full. There are nearly one million Poles living in the UK.

Other embassies, including the Czech Republic have organised buses for their citizens. A Czech embassy spokesperson said they will have carried 500 people out of the UK as of Friday while “thousands” more will have left by plane or car.

More than a thousand Latvian nationals have left in the past couple of days with about a thousand more set to depart on flights scheduled over the next few days, a senior diplomat said.

Diplomats from multiple other countries told BuzzFeed News that they were also aware of citizens that had left, but asked that their country not be named. One diplomat said that at least 2,500 had gone in the past two days alone. Another said that most university students from their country had already left.

The embassy of Finland in London has received more than 100 enquiries over recent days, mostly from students and longer term residents, but it does not have figures for how many people have left, Heli Suominen, the embassy’s press counsellor said. The government has encouraged all Finns travelling abroad to return as soon as possible and Finnair is still flying to Helsinki from London twice a day.

Other embassies said that many of those flying will be people cutting short their holidays.

In an email, a spokesperson for the Spanish embassy said “179 flights were scheduled to take off from the UK to Spain today. Therefore, sufficient air connectivity between the United Kingdom and Spain continues to be guaranteed based on current demand.”

The spokesperson said they believed most of the people on these flights were not long term residents in the UK, but tourists, students and temporary workers.

Spain, like Finland, is among the many EU member states that have encouraged non-residents to return as soon as possible. Germany has also done so. A German embassy spokesperson said: “The embassy has called on German travellers without a permanent residence in the UK to swiftly return to Germany due to potential flight cancellations.”

Five other embassies said they had no way of knowing their citizens’ movements, while two said they had only received a handful of queries, mostly from students. EU nationals are able to enter and exit the country freely without having to notify their embassy. According to estimates, there are about 3 to 3.5 million EU nationals living in the UK. But most embassies believe the true figure is much higher.

The diplomats that did share information said that people were leaving for different reasons and that they had not had the time to compile precise data or organise questionnaires.

“Many people will be living a bit here, and a bit there,” one of the diplomats said. “The father could be here, and the rest of their family back home.” Others will have left to stay close to their relatives, another diplomat said. A third diplomat speculated that people naturally trusted their home country’s government in a moment of crisis.

But for some it was a matter of trust, several of the diplomats said. “People are scared here,” a diplomat told BuzzFeed News. “They think the British government is doing nothing.”

Another diplomat said: “This government’s decision to delay everything, it’s scaring some people. Some trust it, but others are scared.”

A third diplomat told BuzzFeed News that worried parents had contacted the embassy with concerns about sending their children to school.

One of the diplomats said that the vast majority of those leaving this week were not tourists returning home early given the numbers departing.

EU nationals that have lived in the UK a long time hope that the long-term impact of the coronavirus on Britain’s European community will be limited.

Jakub Krupa, a board member of the Polish Social and Cultural Association (POSK), the largest Polish community centre in the UK, said: “There was a lot of confusion about the initial response to the coronavirus outbreak, with Polish government taking one of the most radical steps in the EU with immediate closure of the borders, closure of schools etc, and the UK’s more gradual approach and a lot of people using either the government service or other ways of getting back to Poland feared that the UK govt intervention was ineffective or was anxious of getting stuck with no option of return for long months.”

But, Krupa, who has lived in the UK for eight years, added: “From what I see however, those who are permanently resident in the UK have decided to stay and this should not have a substantial long-term influence on the population of Poles in the UK.”

Official figures from the UK’s Office for National Statistics (ONS) will not be ready for many more months. Asked if any data was available, an ONS spokesperson said: “It is far too early”.

We love WordPress and we are here to provide you with professional looking WordPress themes so that you can take your website one step ahead. We focus on simplicity, elegant design and clean code.